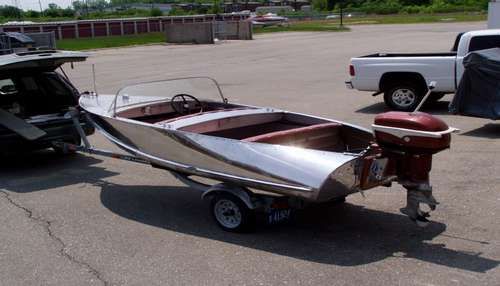 I saw my first Feather Craft in 2000, a 1957 Vagabond II with a walk thru console. After a 2 1/2 year search I hooked up with Mr. Feather Craft himself Jim W. Jim sent me information on a 1955 feather Craft Vagabond I, that he had for sale. During the months to follow Jim sent me pictures of another Feather Craft the one that I now own, the 1955 Vagabond I, pictured below.
This 1955 Feather Craft Vagabond I, was in much better shape then the first one Jim showed me, it had snap in custom made cushion seats, a 1956 30HP Johnson outboard. Jim recommended that I get a new trailer. The one that it was on had axle trouble as Jim picked it up. It now rest on a 2000 Shorelander trailer when it is not in the water.
I had a custom cover made for the boat to keep it clean when it is not in use. Because of the low waters around Harsens Island (Lake St. Clair) I installed a power trim unit. I know that its not an original stock part but It was that or $$$$ in lower unit repair from shallow waters and hidden obstacles on the bottom of the lake.

The steering cables along with the electrical wiring I replaced before I put it in the water, I had the motor tuned up and the lower unit re-built. It's great to know that there are still repair shops that can do magic on the old outboards. Thank you Rose Marine...

The boat gets a new polishing every year before it goes into the water. My Feather Craft on a good day can reach speeds of 25 MPH.
Pictures of my boat I got before I bought it:

Pictures of some of the restoration work: